It’s no secret that Neumann has been at the top of the microphone game for years. Tbe company is one of the best manufacturers around, with decades of top-level performance to prove it. Despite their somewhat steep prices, Neumann microphones remain an industry favorite all around the globe. The Neumann build, sound, and longevity are all fantastic enough to net the coveted “legendary” title for a number of the company’s models.

More than any of its other offerings, however, what really sets Neumann apart is its vocal microphone line. Microphone manufacturers worldwide have attempted to recreate the Neumann vocal mic sound for decades. Their efforts aren’t all in vain— many other companies have been able to produce microphones that come fairly close to the Neumann standard.

Still, there’s nothing quite like the original. It might surprise many to hear that one of Neumann’s best vocal mics isn’t actually a studio mic, but a mic built for the stage. The Neumann KMS 105 is a live vocal microphone that was released in 1999, and hs captivated vocalists and audiences ever since. But what sets this mic apart from other, more affordable stage microphones? Read our Neumann KMS105 review below to find out.

About the Neumann KMS 105 Microphone 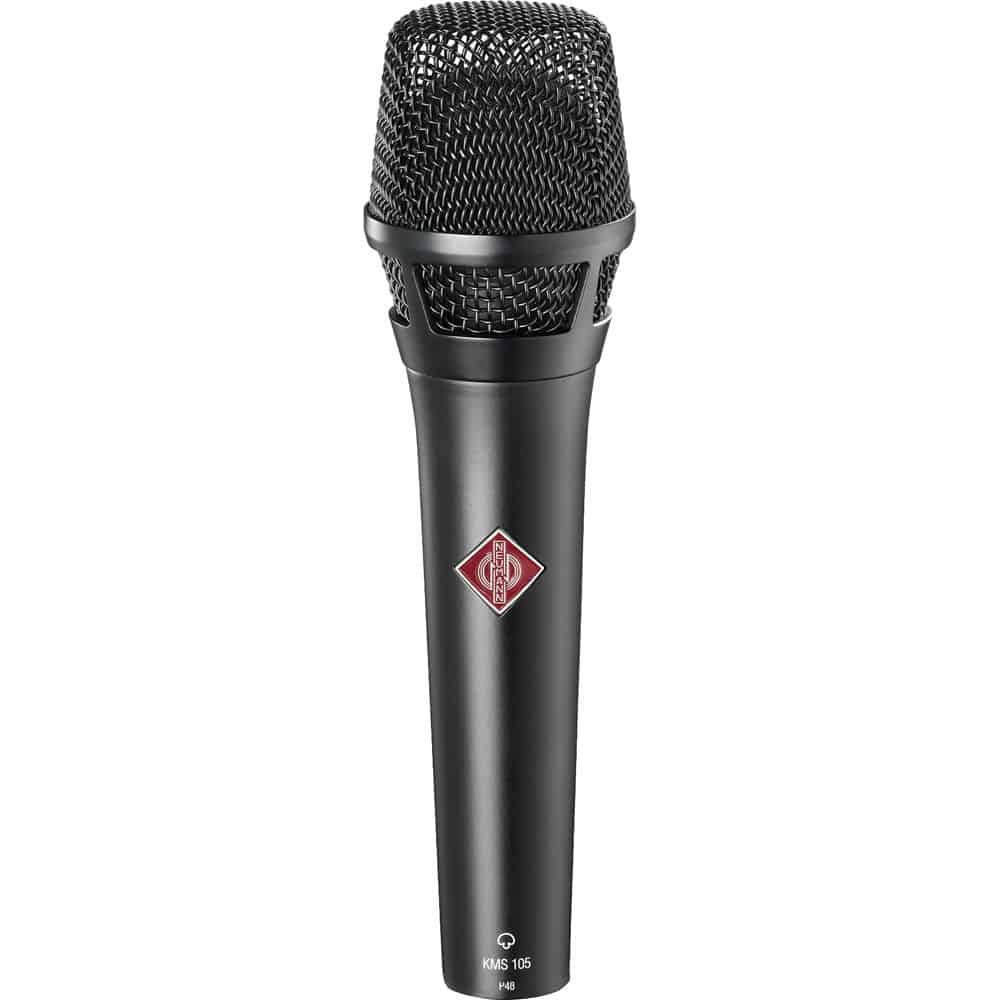 Live vocal microphones are the backbone of the live performance industry, and indeed are most people’s first encounter with the microphone. Handheld microphones come in a variety of shapes, sizes, and price points, but there are a few that rise above the competition. The Shure SM58 and SM57 are well beloved and long-time favorites, and the Sennheiser E835 is another model that’s proven its salt.

With such a range of fantastic, affordable, durable stage mics available, you might be wondering what it is exactly that makes the KMS 105 stand out. After all, the famous Neumann quality also comes with the famous Neumann price tag, and a handheld vocal mic might not be worth the investment. This is where the KMS105 can prove you wrong. This mic is beautiful, comfortable to hold, and performs fantastically on stage. 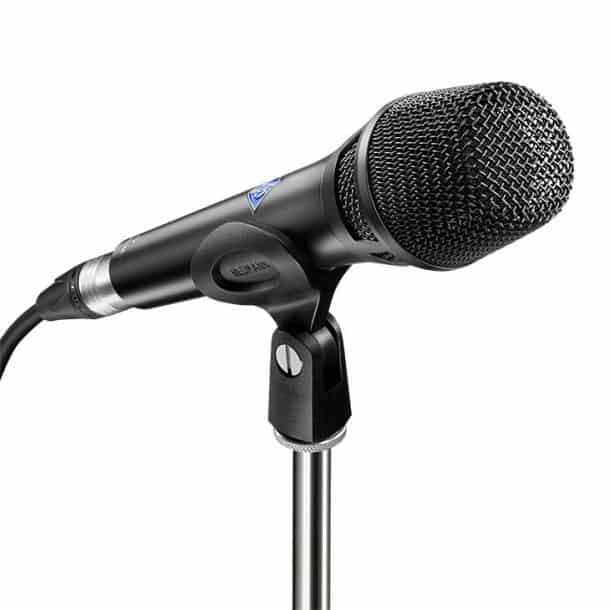 Most stage microphones make use of dynamic capsules, as they don’t require a power source and can thus be used almost anywhere. In contrast to this, the Neumann KMS 105 makes use of a true condenser capsule. Overall, the microphone is designed to be able to transmit human voices with clarity, precision, and richness, all with that special Neumann touch.

Right off the bat, the Neumann KMS105 stands out because of its incredible sound quality. Neumann microphones are known for their rich tone, and the 105 brings that to the stage with ease. It has a highly transparent sound, with a wide frequency range and more precise sound when compared with other dynamic handheld mics. Its transformerless impedance converters are able to handle high sound pressure levels, ensuring optimum performance even with the loudest of sound sources.

Quality Down to the Bone

Perhaps what really allows the KMS 105 to stand out from its competition is its carefully designed condenser capsule. Based on the Neumann K50 capsule, which saw use in the KMS 105’s predecessor KMS 150 and other microphones, the KMS 105 is able to bring true Neumann sound quality to the live stage. The condenser capsule brings a clarity to live sound that’s unparalleled, and has a smooth frequency and light, flattering top-end.

If you were thinking that the Neumann KMS 105 is a mic meant for the mic stand, you’d be proven wrong. The KMS 105 is designed for close micing in nearly all aspects. The head grille contains a multi-layer pop filter made of wire gauze that doesn’t cause any problems with sibilance or directivity. It also has a fixed low-cut filter that reduces proximity effect, and thanks to its low output impedance it can work with cable runs of up to 300 meters without transmission losses.

Neumann microphones are an investment, and the KMS 105 is no different. Just like its studio microphones, the KMS 105 is built to last. It has a robust, all-metal housing that protects the capsule against damage and noise from handling. The microphone grille is made of several layers of metal mesh, and the capsule assembly has its own shockmount to prevent damage from falls or mishandling. The grille can also be unscrewed for cleaning, ensuring long-lasting quality performance.

The Neumann KMS 105 is built for the stage, and that’s where it shines. Its supercardioid polar pattern is tight, with excellent background noise rejection and feedback resistance. When speaking or singing directly into the on-axis area, there is some sensitivity, but the overall effect is ideal for performers with fantastic mic techniques. It has an uncolored, transparent sound with a wide frequency response. The open and natural character is perfect for performers who sing with clarity and precision.

While the KMS 105 does come with the typical Neumann price tag, you can be assured that you’re getting your money’s worth. The KMS 105 is lauded in the industry as one of the best handheld vocal microphones in the business, with a fantastic sound that suits all voices. From first listen, the KMS 105 is sure to impress.

Where to Buy the KMS 105 Microphone 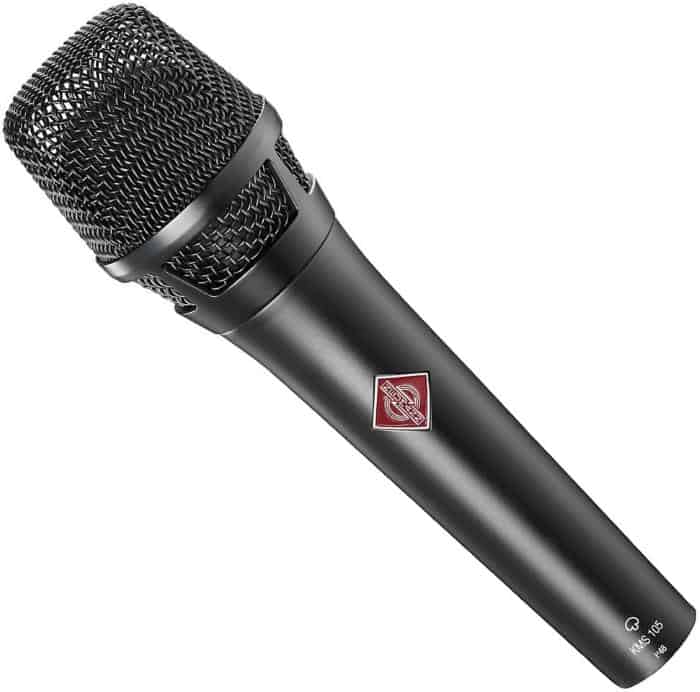 The KMS 105 is a fantastic addition to any performer’s mic cabinet, and though it may cost a pretty penny it’s definitely worth the investment. This microphone performs bets with a top quality PA system, with a high level of feedback protection. If you’re on the lookout for one of the best-rated microphones in the business, then the Neumann KMS 105 is exactly what you need. Find the best deals for the Neumann KMS 105 Microphone here.

The Neumann KMS 105 brings the fabled Neumann quality to the live stage. With an open, transparent sound that suits nearly every type of performer, the KMS 105 is sure to make any singer a star. While its price can be a barrier for many, you'll find that performance-wise it's worth every cent.

Originally from the East Coast, Naomi started singing as young as 3 years old. In her early teens Naomi made some embarrassing YouTube videos before settling on a love for Podcast editing. When she's not pouring over endless amounts of audio, she lends her expertise to us here at Shout4Music with her crystal clear and finely tuned microphone reviews.